Swadlincote: Councillors up in arms over plans for giant new solar farm covering over 500 acres 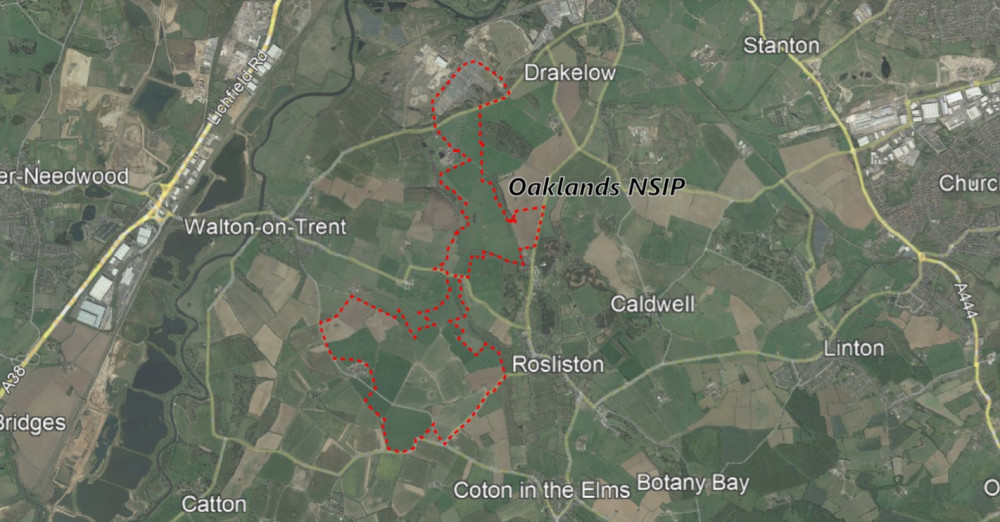 Councillors are up in arms and preparing for a lengthy and potentially costly battle against plans for a mammoth solar farm - which would be the UK's largest.

The planned Oaklands solar farm, from BayWa r.e. UK Ltd, would cover 540 acres of agricultural land between Rosliston and Walton-on-Trent.

It is so large that it has to be considered nationally by a Government planning inspector over the next couple of years, with local councils only involved as consultees.

Councillors are being asked for their views ahead of a planning application being submitted, after which there will be a further consultation period.

Cllr Kevin Richards, leader of South Derbyshire District Council, said the scheme, alongside widespread development in and around Foston, would make the district look like "a reflective plate, if you were up in space".

"When this goes up all of this land will be off limits, it is redundant, and you won't be able to do anything with it but get blinded by it when you drive past.

"There are other sites that we could use instead."

Cllr Trevor Southerd, deputy leader, said he has already had talks with the authority's chief executive to ensure it can pay for outside experts to help the council research and combat the planned solar farm.

The scheme intends to generate in the region of 160 megawatts of electricity a year, said to be enough to power 40,000 homes – nearly all the homes in South Derbyshire.

Its plan would also include an energy storage facility capable of storing 37.5 megawatts of electricity.

If approved, it would be double the size of the current largest solar farm in the UK – the Shotwick Solar Park in Flintshire, Wales, which has a capacity for 72.2 megawatts of electricity a year and covers 250 acres.

Cllr Amy Wheelton, who owns farmland which connects to part of the proposed scheme, said that the project would impact 3,047 properties in the surrounding parishes.

She said food production security needed to be considered.

Cllr Wheelton said: "None of the traffic options are acceptable in any way, shape or form."

She said every parish council in the area had filed objections as part of this initial pre-application stage and that she was "really worried" about the proposals.

Cllr Wheelton confirmed that the land was high quality for agricultural purposes, with adjacent fields being cultivated by her family for three generations.

Cllr Melanie Bridgen said: "I share all of the concerns shared by Cllr Richards and Cllr Wheelton.

"Rosliston would be greatly impacted by this development."

She said it was all a matter of scale, decrying the January approval of a small solar farm in Scropton versus early widespread opposition to the huge 540-acre scheme.

"This is very valuable farmland that will be developed. I just don't accept that sheep can be kept underneath it too, it is a major engineering infrastructure and will impact on biodiversity and wildlife."When we look at smaller sites it will not affect wildlife, it will all go around it, this would be a massive site and would cause massive disturbance. 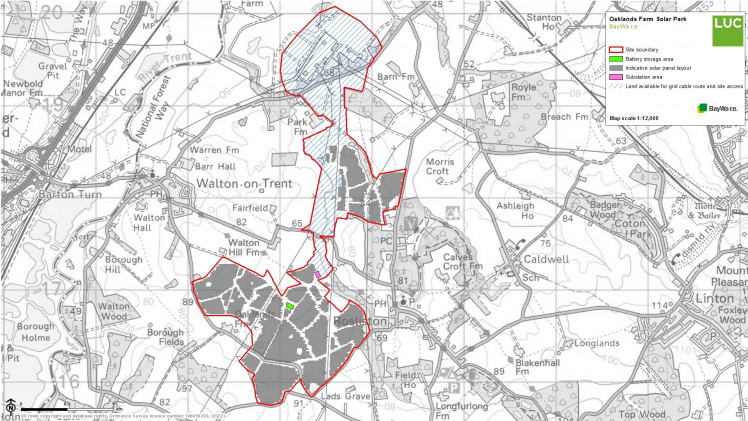 The extent of the planned solar panels can be seen here

"Something of this scale in such an attractive part of South Derbyshire is unacceptable.

"Other sites are for the taking. We must do what we need to do to ensure something of this scale is not approved in South Derbyshire."

Cllr Lisa Brown said the project was "huge" and said the authority had a long history of paying for outside consultants to provide expertise on significant planning proposals such as this, and should do so again.

She said: "It doesn't get bigger than this."

Cllr Southerd asked if there were any other projects of this scope "that have been defeated".

Steffan Saunders, head of planning, said there had been some significant infrastructure schemes which have been rejected and that the authority had already started looking at extra expertise.

He said that the scheme represented the "undeniable" loss of agricultural land and that the food economy infrastructure needed to be considered.

BayWa r.e. UK Ltd details that the solar panels would be 2.7 metres in height and that hedges would be planted to help obscur the infrastructure from view.

It says construction traffic would not be permitted through Walton or Rosliston and would approach from the north and south, with one abnormal load to be delivered through Coton in the Elms.

The firm says this site has been chosen due to its vicinity to the decommissioned Drakelow power station, which provides widespread existing electrical infrastructure required for the scheme.

It would remain on the site for 40 years, after which it would be fully decommissioned and returned to agricultural land.

On its consultation website, the firm says: "This scheme represents an important contribution to meeting the UK's legally binding target under the Climate Change Act 2008 to achieve a 'net zero' carbon account by 2050.

"Like other renewable energies, solar power represents a 'clean' source of renewable energy as it doesn't release any harmful emissions or pollutants.

"Solar energy is also one of the cheapest forms of new renewable power generation in the UK, and consequently can contribute to controlling consumer's energy bills into the future.

"In addition, there are a number of potential additional, more local benefits, including:

Swadlincote: Appeal goes in on decision to reject plans to build new homes on Green Belt land in Newhall